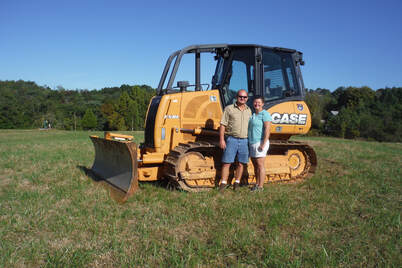 WS Parks Contracting still operates on the same principals today as it did many years ago, when Shawn Parks, co-owner, started mowing yards in the neighborhood at the young age of 5. Although he could not reach the top handle of the lawn mower at that time, the motivated young man was determined to get his job done and utilized the middle bar on the mower and went to work. That is the kind of determination that he still puts into each and every job today. With the addition of his wife and business partner, Lisa of 32 years, you now have an unstoppable team determined to give the best customer service around.


WS Parks Contracting got started in 1989 as a grounds maintenance & landscaping contractor, then known as Parks Landscaping. As time went on the company was evolving into more of a landscape & erosion control operation, with an emphasis on hydroseeding. The decision was made in 1996 to sell the grounds maintenance division of the company to focus on landscaping & erosion control. With hydroseeding still being a fairly new service offered in the eastern NC area and the vast real estate expansion during that time, it made for a lot of long days for Shawn, Lisa, and the crew.


With the continued success of the company and growing list of satisfied customers, also came the request for additional services. The landscaping projects continued to evolve into larger grading & seeding jobs, which then continued onto excavation and small site work projects. The company now has involvement with many aspects of site construction, such as grading, excavating, clearing & hauling, foundation layout & construction, utility installations, various concrete work and of course, finish grading & landscaping. With the expansion of services provided by the company, it was decided in 2011 to rename the company to WS Parks Contracting as it is today. We welcome you to watch our continued growth & expansion, or better yet, become one of our valued customers & experience the excellence in service for yourself.
Proudly powered by Weebly